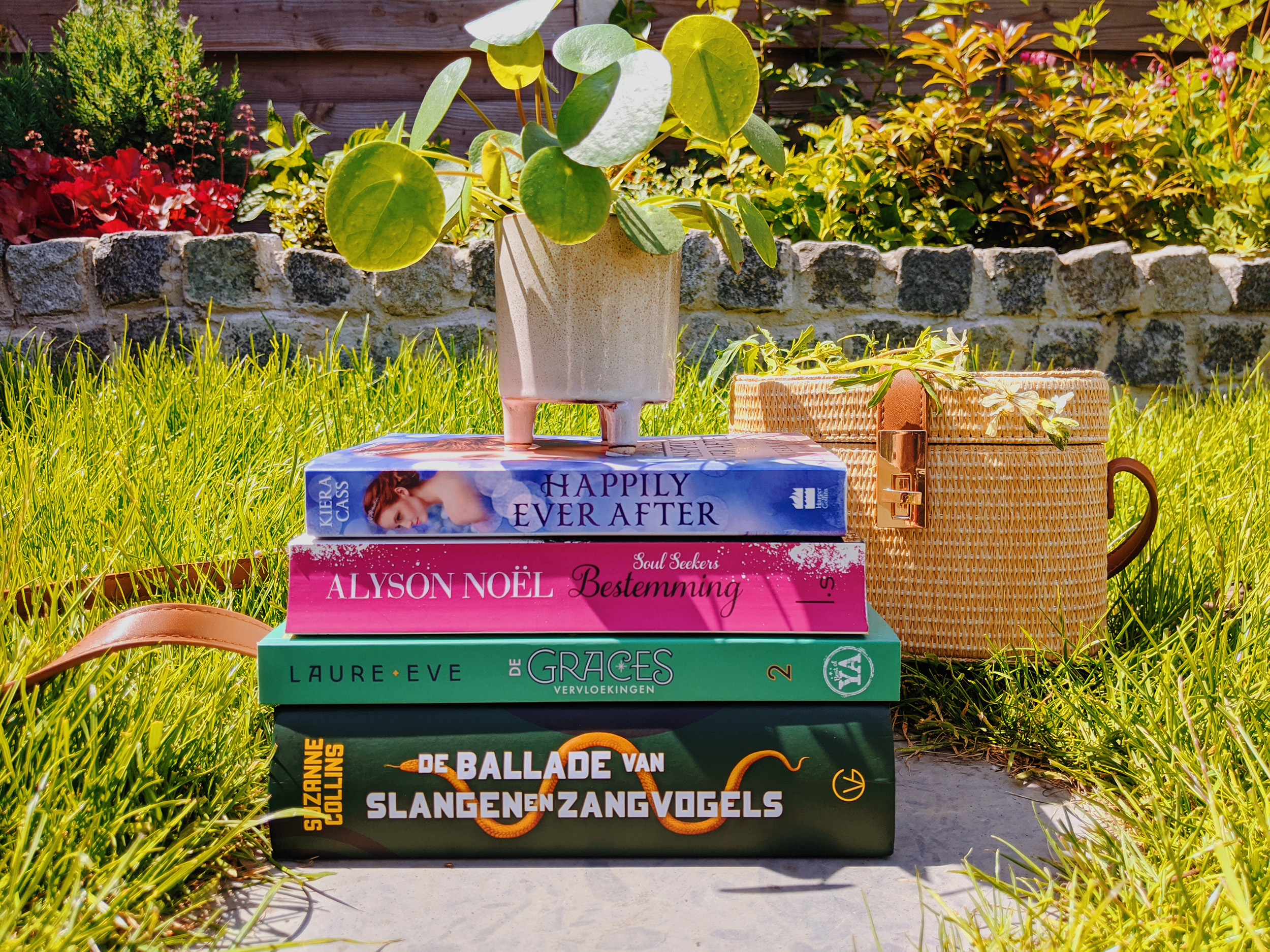 In May I wanted to read books with more happy-coloured covers and I think I succeeded. I read 4 books, which I’m pretty happy about and I really liked all of them. These are my May Reads.

All of my May books have been pretty good. Some are pretty popular, while others aren’t. But I have noticed that I don’t always agree with the opinion of people on Goodreads or Bookstagram. Last year I chose most of the books I’ve read because of recommendations. But I’m really going to try and pick books for myself this year. After I’ve finished the stack of books that are still waiting of course.

This book is a spin-off from the Selection series. A series I’d never thought I’d like books like that, but after they kept showing up on flyers in the books I bought, I gave them a try. And it turns out I really DID like them! So when this spin-off with stories of side characters turned up, I knew I wanted to read it.

Like the other books from the Selection series, I really enjoyed Happily Ever After. It was great to get to know the other personas in the book a bit better. See why they made certain decisions and what was going on in their lives while America (the main character) wasn’t around. If you liked the Selection books I can really recommend this one too.

You might not know this book. I sure didn’t, but when someone offered me to trade it the story sounded interesting enough! A story about a girl finding out she has certain powers isn’t that original. But this was about old native powers, something I hadn’t read about before.

What is it about: Strange things have been happening to Daire Santos. Animals follow her, glowing people appear from nowhere. Worried that Daire’s having a breakdown, her mother sends her to stay with the grandmother she’s never met, who lives in New Mexico. Her grandmother recognizes Daire’s episodes for what they are – a call to her true destiny as a Soul Seeker, a person who can navigate between the living and the dead. Daire must be quick to learn how to harness her powers, to save the town and the people in it from an evil force.

While this book focuses mostly on a girl finding her way with her new powers, you can see there’s a deeper story behind that. While Diare is trying to get used to her new abilities, something much more serious is happening in the New Mexico town she lives in. I have a feeling we’ll hear more about that in the next books of this series. I wasn’t crazy in love with this story, but it’s definitely interesting enough for me to want to read the next book too.

I really don’t get why these books aren’t more popular! This is the second book of The Graces series and I really enjoy the story so much. It feels like a Summer Witch story, which there aren’t that many of. It’s light with a hint of creepy and mystery.

What is it about: Picking up the pieces after the chilling events of the previous year isn’t easy, but the Grace siblings are determined to try and get things back to normal – and if that means papering over the cracks, so be it. Summer has had enough of secrets, but sharing a house with someone who’s been resurrected from the dead isn’t something you want the neighbours to know about. As ex-best friend River wreaks havoc with her twisted spells, can the Graces ever escape the curses that have been tearing their family apart for generations?

While the first book of this series focused mainly on Morgan/River and how the outside world saw the Graces, the second (and I believe last) book gives you more of an insight in the world of the Graces themselves. They’re trying to correct everything that went wrong last year, and it isn’t easy. Things don’t go as planned and that makes it believable. I really think these books are perfect for a bit a summer magic!

I don’t think this book needs much introduction. It’s a prequel to the Hungergames book about the person we know as “President Snow”.

What is it about: In the Capitol, eighteen-year-old Coriolanus Snow is preparing for his one shot at glory as a mentor in the Games. He’s been given the humiliating assignment of mentoring the female tribute from District 12, the lowest of the low. Their fates are now completely intertwined – ; every choice Coriolanus makes could lead to favour or failure, triumph or ruin. Inside the arena, it will be a fight to the death. Outside the arena, Coriolanus starts to feel for his doomed tribute… and must weigh his need to follow the rules against his desire to survive no matter what it takes.

Like I said, I don’t think this book needs a lot of context. If you liked the Hungergames you will most-likely enjoy this book too. It has a few twists and turns. But unfortunately not a lot of character development, which I expected because we know the person Snow becomes. The ending felt a bit rushed to me, so I read it twice to see if I didn’t miss anything. But overall it was a really enjoyable read and I loved getting back into the world of the Hungergames!

So these were my May reads! What books did you read last month? Any recommendations for me? Let me know below this blogpost so I can add some new books to my Goodreads account!

Hello! I'm Babet. I live in The Netherlands with my husband, our two bunnies and a our pretty kitty. I'm obsessed with tartan, pumpkins and anything autumn. But I also love food, traveling, reading, Harry Potter and crafting.
So a little bit of everything really.

Cheers! 🥂 I have a week off and I'm planning to

The books I've read in June 🖤 I loved all four

Finally found a frame for my beautiful print by @m

"Refusing To Look At Boss" - a series 🖤 haha he

Just popping in to say hi! 🖤