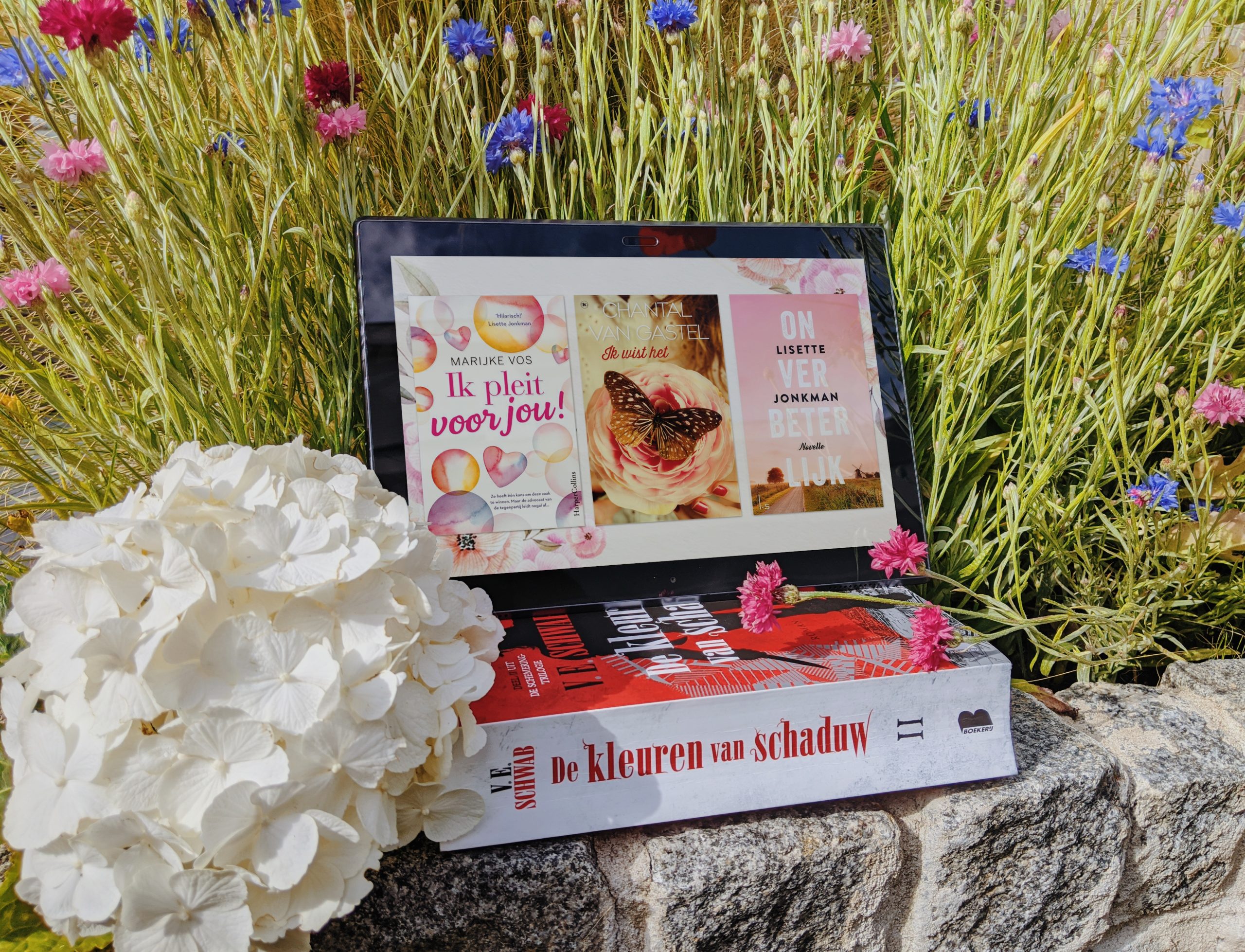 I’ve read some different books in June than my normal YA fantasy. It was such a hot month with horribly sticky night I decided I needed some light, airy books for those nights. So these are my June reads.

Like I said, I’ve read some different books. Of course there’s still a YA/NA fantasy book, but I also read 3 romance novels by lovely Dutch authors!

I’ve won this book from the publisher Best of YA on Instagram which is really cool because I LOVED the first book! But the opinion below is still my own and I haven’t altered it because this book was gifted.

What is it about (don’t read if you haven’t read the first book yet!): Four months have passed since the shadow stone fell into Kell’s possession, since his path crossed with Delilah Bard, since Rhy was wounded and the Dane twins fell, and the stone was cast with Holland’s dying body through the rift, and into Black London.

Things have almost returned to normal, though Rhy is more sober, and Kell is now plagued by his guilt. As Red London finalises preparations for the Element Games-an extravagant international competition of magic, a pirate ship draws closer, carrying old friends back into port.

Just like the first book I loved this one too! The different Londons in which the story takes place are so different but still recognisable and the personas each have their own personality. I adore Lila most for her courage, I always love a strong woman in my books. Anyway, if you love magic and London and pirates and dark characters: read this series!

Romance novels I read in June

Ik pleit voor jou! (I plead for you)

What is it about: The young, ambitious advocate Janna wants to do anything to get the promotion she’s been working for. But one Friday afternoon an after-work drink gets out of hand and threatens to ruin everything. She loses Very Important Documents after she drinks too much..

Janna gets one more chance to impress her boss: the divorce between two famous Dutch TV stars. She tries everything to win the case for her client and her monstrous twins. But then she recognises her opponent from the afternoon in the bar..

This book reads like it’s a feel-good movie. I enjoy the ambitious Janna that tries her hardest to win a case, even though she feels like it’s not what she’s supposed to do. You really feel for Janna in this story and you build a true connection to the characters. A lovely, light read for the summer months by Marijke Vos.

What is it about: Mia isn’t the type to do what everyone else does. Pure by intuition she quits her job to open her own flowershop. She tries everything to make it a succes, but the magic of the flowers brings her more than she would’ve ever thought.

She meets the man of her dreams. And on top of that the receives all kinds of mysterious messages. Mia is like a magnet to special stories and this doesn’t go unnoticed by a certain reporter. Can Mia follow her intuition and how much can she be involved in the lives of the people that appear in her mysterious messages while not losing herself?

This book was so awesome!! I loved the entire vibe of the flowershop and the things Mia goes through. Put the mysterious messages on top of that and 2 cute guys and it’s the perfect romance book for me. But it’s more than that. It’s not just romance, it’s about following your own dreams, helping people and about the coolest cat ever. If you like flowers, love and cats you should definitely read this book by Chantal van Gastel.

What is it about: The last place journalist Bente wants to go in quarantine is on the farm of the incorrigibly rude writer she just interviewed. But when Bente tries to go home after the horrible interview her mother calls to tell her Bente’s father has Corona and that she shouldn’t go home. She should stay where she is. In the middle of now where, with that horrendous guy? Not that he looks that bad, but his attitude made her hate him within a few hours. So that 1,5 meter social distance won’t be any problem.. or will it?

The first Corona/COVID-19 story I’ve ever read and it was.. Steamy! It was a really hot story haha. I really liked Bente’s approach to everything and of course the writer isn’t as bad as he seems. The story has some heavy parts too that really had me worried. All and all I was super invested in the story and I still love everything that Lisette Jonkman has ever written.

So these are my June Reads. If you’re Dutch and you’re looking for some very fun reads I would definitely recommend the books of these 3 lovely authors!

Do you read books by authors from your own country often?

We spend a weekend in Amsterdam in one of the most

I could do with an ice cold @starbucksnederland dr

I need a moss painting in my house because it's th

I baked a delicious blackberry pie 🖤 and you ca