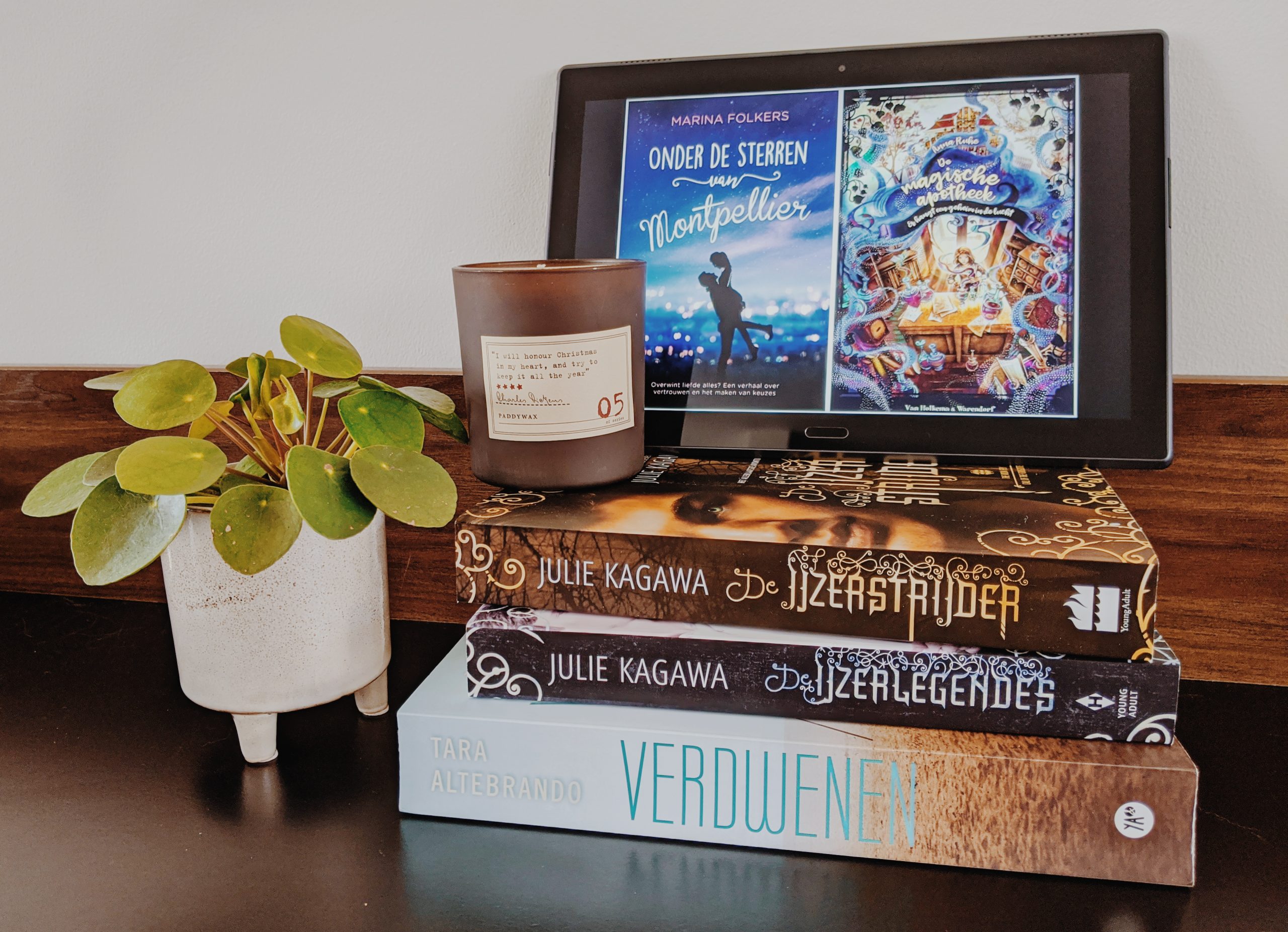 This month I read 5 books, woohoo! Partly because we were on vacation to the Canary Islands, so I had plenty of time to read. I read even more than I show here, but I didn’t include the books I didn’t finish. These are my February reads.

Like I said, I didn’t include the books I didn’t finish. In December a Dutch publisher had a free e-book for download every day and I downloaded almost all of them. But, of course, some of them weren’t my taste and I didn’t finish those. These are my February reads that I actually DID finish.

In my previous book-post I told you about the Iron Fey series. I read the second book of the spin-off “Call of the Forgotten”, which I enjoyed. And this month I finished the series with the last book, The Iron Warrior / De IJzerstrijder. I must say, I did not see this ending coming! It was a real twist which made the book exciting until the very end.

I also read the novel with short stories from the world of the Iron Fey: The Iron Legends / De IJzerlegendes. It gives you an insight in the lives of 3 of the main characters from the books which I thought was really cool. In the main books you get to live the story through the eyes of Megan Chase and later through Ethan Chase. But in this book you get to see what it’s like for the other characters too. I really wouldn’t have want to miss it.

This book isn’t one that I’d normally pick up, but I traded it with someone on Instagram because it sounded interesting:

What is it about: Eleven years ago, six five-year-olds went missing without a trace. Now five of those kids are back. They’re sixteen, and they are … fine. Scarlett comes home and finds a mother she barely recognizes. But she remembers Lucas. Lucas remembers Scarlett, too, but they can’t recall where they’ve been or what happened to them. Neither of them remember the sixth victim, Max. He doesn’t come back and everyone wants answers.

The writing style took some getting used to. The writer wrote the story from different views and each of the people that live the story have their own way of thinking. Which results in some.. typical pages with sometimes just 3 words written backwards. I didn’t really enjoy it, it took me out of the story. But the story itself was pretty interesting. Not one of the best books I’ve ever read though.

The next book I’ve read was De Magische Apotheek. This book is only available in Dutch and German, so there isn’t an English title (yet), but it translates to: The Magical Apothecary.

What is it about: It’s a story about a girl called Lucie who moves to an old mansion with her parents and younger brother Benno. One day Lucie discovers a secret room beneath the villa and goes out to explore it together with Benno and her neighbor Mats. They find a room filled with all kinds of bottles and as they soon find out, they don’t just contain amazing smells.

I enjoyed reading it as an adult, but this book is definitely written for a younger audience. I’d say kids from 10 years and up who like fantasy should really read it. It’s exciting and you keep wondering what’ll happen next, but it’s not too scary.

This book is from a Dutch author, so again I can’t share the English title. Onder de Sterren van Montpellier means: Beneath the stars of Montpelier. Now I don’t read feelgood books often, but every time I do, I really enjoy it. Just like I did with this book.

What is it about: The story’s about a young woman, Cleo, who desperately needs to get away from here current job, workplace and even country. A friend offers her a chance to fix up the house of her aunt and uncle in the south of France and Cleo takes that chance. As it turns out, the neighbor of her friends aunt and uncle is a very handsome and interesting man.

Like most feelgood books, this one is about a girl in search of herself and a man she’s not ready to meet. But that’s not all, one thing I loved most about this book is the description of all the “normal” things Cleo does. It really made me want to get in my car and drive to France immediately! Eat a croissant on the terrace, go shopping, visit old buildings. This is one of the BEST books to read on vacation if you ask me.

And that’s the wrap-up of my February reads! I really enjoyed most books and I’m proud of myself for reading some different genres this time like a thriller and a feelgood book instead of just fantasy haha.