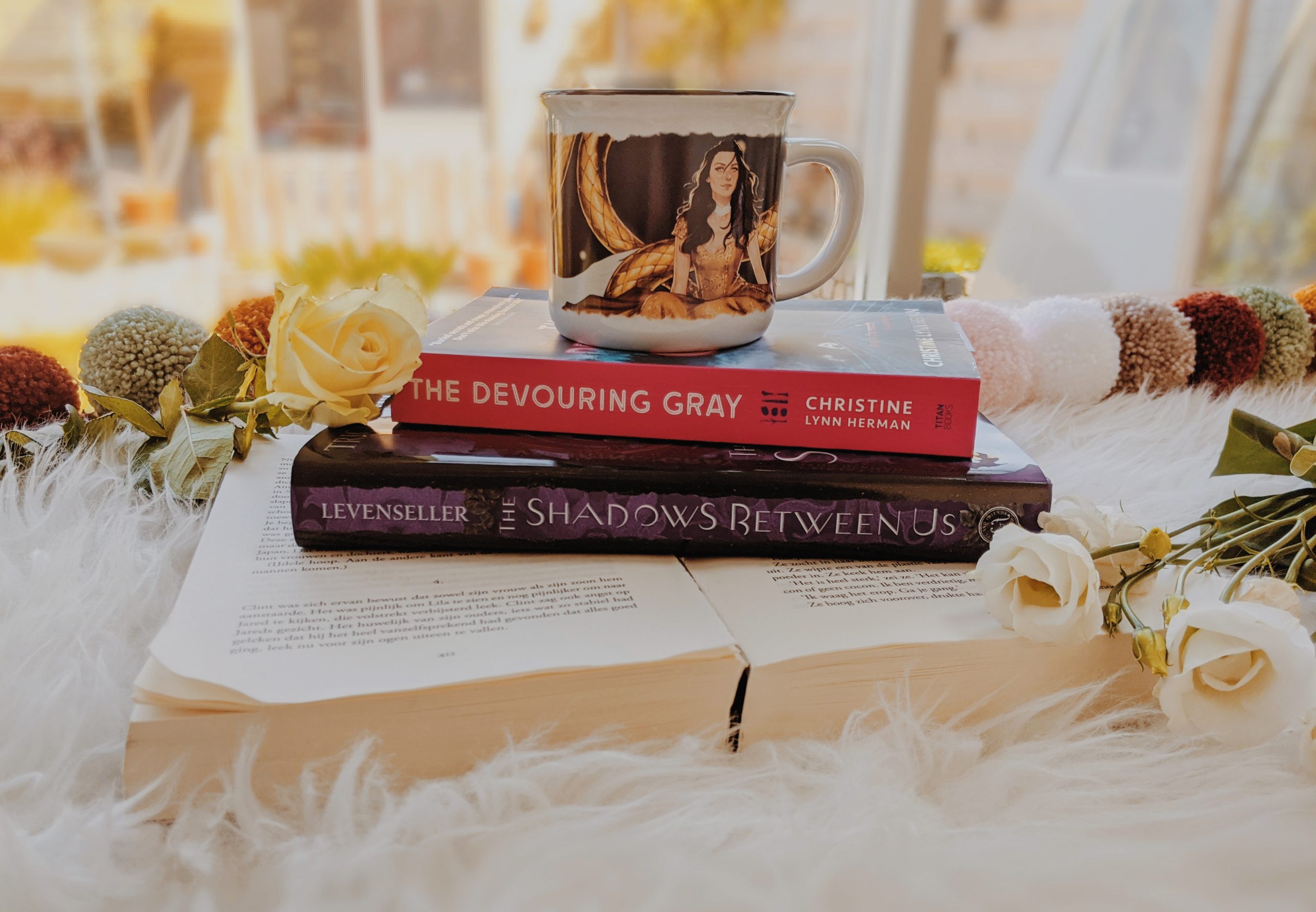 Another month gone and passed. In the last month I read 3 books, not that many but one of the books was well over 800 pages. I admit I did something horrible to that book! I’ll tell you in this post about my April reads.

For some reason I don’t manage to read as much as I did last year. I don’t know why, because I still love most of the books I read. Maybe it is because I try to mix up my genres. A light Fantasy story reads faster than a complicated Thriller of course. So for my April reads, I read only 3 books.

I bought The Devouring Gray when we were in the UK last year. I didn’t have many books with sprayed edges yet, so the beautiful cover with those edges drew me in. And when I read that this book was perfect for fans of Stranger Things and The Raven Boys, I knew I had to have it.

What is it about: Uprooted from the city, Violet Saunders doesn’t have much hope of fitting in at her new school in Four Paths, a town almost buried in the woodlands of rural New York. And because she’s descended from one of the town’s founders her new neighbours treat her with distant respect, and something very like fear. When she meets the other founder’s descendants, she starts to wonder if the townsfolk are right to be afraid.

This book was AMAZING! The story was super original and the setting was too. I loved the characters in this book and the way they dealt with their (lack of) powers. The book had a great pace that made sure I wanted to know what happend next without being so full of events that there’s no time to take a breath. It was a very suspenseful story, without being exhausting. I can’t wait for the sequel The Deck of Omens to arrive!

The Shadows Between Us

For my birthday I got a Fairyloot Box from my husband and this was the book that was in it. The theme was “Rulebreakers” and The Shadows Between Us is definitely full of those!

What is it about: Alessandra is tired of being overlooked, but she has a plan to gain power:

No one knows the extent of the freshly crowned Shadow King’s power. Some say he can command the shadows that swirl around him to do his bidding. Others say they speak to him, whispering the thoughts of his enemies. Regardless, Alessandra knows what she deserves, and she’s going to do everything within her power to get it.

This story is NOT about a girl that’s trying to get some man to notice her, fall in love and live happily ever after. The main character of this book, Alessandra, is a relentless woman who knows what she wants and she’ll stop at nothing to get her. But her opponent isn’t dumb or naive either. When I started reading I thought I knew exactly where the story was going, but all the twists and turns along the way made for a great read!

I did something horrible to this book.. I actually still can’t believe I did it. But this book was so big and so heavy, my hands hurt a lot after reading it (I have a stupid thing with pressure on my skin so that’s why). But I really wanted to read it so.. I cut the book in half. Don’t judge! At least now I got to enjoy it haha.

What is it about: All around the world, something is happening to women when they fall asleep; they become shrouded in a cocoon-like gauze. If someone tries to remove the cocon, the women become feral and spectacularly violent..

The abandoned men, left to their increasingly primal devices, are fighting each other, while the remaining women are just fighting to stay awake.

While I really enjoy Stephen King’s books, this one really took some time to get into. One of my main problems was the truly enormous amount of characters that are presented in just the first few pages. You read the story from the point of view of about a dozen people. And all of those people have names, surnames and nicknames they go by, which makes it very confusing at times. The story itself is pretty interesting, but I’m not totally invested in it like I am with some books. The ending wasn’t that spectacular either, so I feel a lot less worse about cutting this book in half haha.

So these were my April reads! What books did you read last month? Any recommendations for me? Let me know below this blogpost so I can add some new books to my Goodreads account!