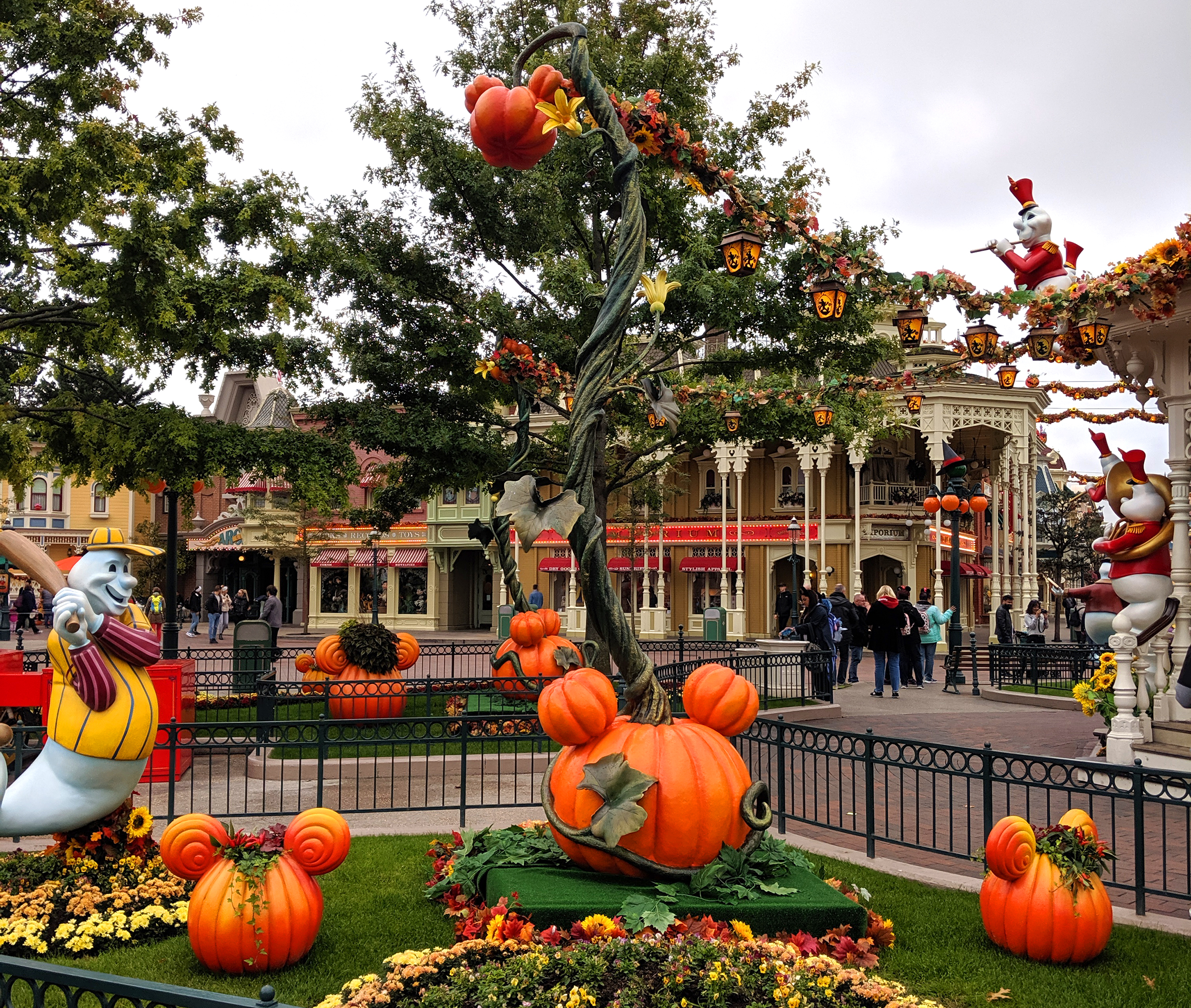 I can go on on about how pretty it was and how much fun, but instead I’m just going to show you the photos with a little commentary here and there. For starters: the entrance! Pumpkins, ghosts and fall foliage everywhere make sure you’re getting a Halloween vibe the moment you step inside.

I get so excited every time I see the Disneyland Hotel, one day I really want to stay there too. But for now it’s just the building that says “You made it! Enjoy Halloween in Disneyland!” .

Not all parts of Disneyland Paris are decorated in Halloween style. You’ll find most of that in the main part of Disneyland and in Frontierland as you can see above. But they have smaller bits of Halloween decorations everywhere, like this Jack-in-a-box and these amazing Pirate Pumpkins at the Pirates of the Caribbean ride!

And let’s not forget the parade! There’s a very pretty Fall Harvest Parade twice in the afternoon with amazing Autumn & Halloween wagons. Mind you. They’re one parade on Mainstreet but when they get to the square in front of Sleeping Beauty’s Castle they split and go both ways. So if you want to see all wagons up close you have to be on the Mainstreet or just watch the parade twice, because they perform on the square in front of the castle so you don’t want to miss that either!

There was also a great musical show with all the Disney Villains and Ursula from The Little Mermaid was the star of the show. All the villains sang a part about they’re movies. I heard it was cut short the day after we went, which is a same because it was really great to see all those bad guys together.

Unfortunately the main parade and the fireworks show are not in Halloween theme. I get it, it’s expensive to change all the wagons for a short period of time. But I really do think the fireworks show could use something new. It’s been the same for at least 5 years and after seeing it this many times I kinda want to see something different.

Halloween in Disneyland Paris: see you next time!

But still, it’s all very beautifully decorated and I got a real Halloween feeling while being there. It’s the details that make it that amazing. Small ghosts on the top of roofs, big thorny bushes around the castle and of course the giggly ghost sounds, if you’ve been there you probably know exactly what I’m talking about!

Time for the next candle 🤍 WoodWick Warm Wool!

New centerpiece! 🍁❄️ A mix between Autumn a

Arguably my favourite project of last year 🌙 Yo